OK I am in serious need of some charity here.

Part the first is my computer, which is dying. The CD-ROM drive is dead and fails to recognize a disk in the drive which makes fixing the OS problematic, which is another problem I have with my computer. I can’t access my MySpace page or talk to any of my friends there until I upgrade my browser, which requires I upgrade my OS which requires I have a computer that can reboot and also a working CD-ROM drive. The rebooting issue is a problem because I can’t shut down the computer because of a flaky power supply that works for as long as it isn’t turned off, but sometimes doesn’t want to restart after being shut down. What that boils down to is the ‘puter is on its last legs.

Part the second, I need to get some fenders for Gigi. I’m getting tired of shoes full of water when the wet stuff is on the streets or falling from the skies and then on the streets. Also Gigi would stay a lot cleaner and would look better if mud and clag would stay confined in the area of the tires instead of getting sprayed all over the bike. And safety would be enhanced if the front tire wasn’t throwing water and road grime in my face when my speed exceeds 13 MPH. If I wasn’t wearing glasses it would be different but after a few minutes of road gunk getting sprayed in my face my outward visibility is drastically impaired. 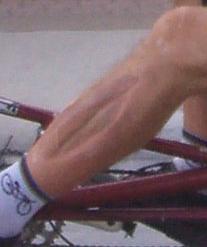 I have been asking about getting it made into a tattoo, but I have zero budget and I have been quoted prices ranging from $250 to $2000 to get it made beautiful. It’s not just the ugly scar that is the problem, there is also what the scar represents in my mind. Every day I get up with huge scars, both on my body and in my mind and psyche, while the guy that tried to kill me gets up with no consequences for his actions whatsoever, except whatever karma has placed on him in this life. I’m tired of the ugly reminder that someone tried to kill me because I was there doing something that had absolutely no negative impact on his life whatsoever, and he gets to live his life while I’m scarred physically and mentally and unable to work. So, what I’m asking for here is either a tattoo to make it beautiful, or plastic surgery to make it go away. I’ll still be physically and mentally scarred, but at least I won’t have that monster reminding about it me every day. And it will then remind me that there are people that care.

Like Loading...
This entry was posted in Uncategorized and tagged alms for the poor. Bookmark the permalink.