The legs sticking out from under that circus tent are me, on Bike To Work Day

The folks over at Bike Friendly Garland helped run the Commuter Energizer Station at Downtown Garland Station for DART, and they had a photographer. 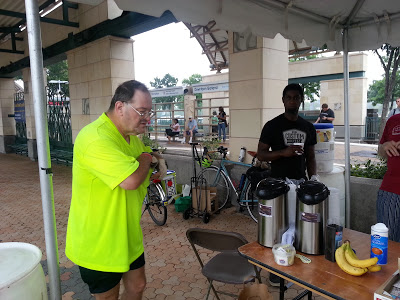 This picture was taken just before the lady tried to dump the case of bottles in my left pannier, and right after I got a cup of coffee. You can see Blue to my left, behind me in the picture.

Posted in getting to know me

Tagged not Sasquatch, There is photographic proof of my existence

Trying to figure it out, and the Feed

The Feed is still wonky in that what few actual bicycle reports I get are mostly from the UK, and the rest are not actually about bicycles but almost everything else, including a link to an article about women’s monthly cycles. I was getting too little a few months ago, now I’m getting too much, but I’m still not getting bicycles. Well, that’s why I put a human being in the loop to filter out the non-pertinent items.

Up first is a CA wreck that authorities are calling a single vehicle wreck. Cyclist Injured in Ralston Ave. Crash Given the evidence if there is a second vehicle involved it would be a Jerry Brown wreck, a car passing so close that it causes a cyclist to lose control without actually touching the cyclist. If the second vehicle managed to get that close without the cyclist knowing it was there (electric car or cyclist not exercising good situational awareness) then the startle reaction can cause a wreck all on its own. The other reasonable explanation is something on the road knocked the front tire out from under the cyclist, another good reason to exercise good situational awareness.

Also from CA a BMW makes a U-turn and cuts off a cyclist. Bicyclist injured after crashing into car Of course the person writing the article doesn’t subscribe to that hypothesis. Any way, about the only way to avoid a wreck like this is to use heightened situational awareness so that you are aware of the idiot turning in front of you and have time to react. Infrastructure that prevents idiots making U-turns from interfering with cyclists would be the only way to prevent this.

From NJ a sidewalk cyclist narrowly escapes serious injury or death. Bicycle rider escapes injury in Red Bank after brush with truck Truck driver is backing out blind over the sidewalk, sidewalk rider can’t see the truck. Truck driver leaves scene without leaving contact information. Every driveway is an intersection, use intersection protocols to avoid. Since this appears to be in a residential area the only infrastructure change to make would be making hitting a cyclist or pedestrian a crime, but hit-and-run is already a crime so I don’t know what making hitting a cyclist a crime would have done to prevent this wreck.

From West Canuckistan comes their annual warning that people will soon be changing from cars and buses to bicycles. Warming weather means more cyclists and a renewed focus on safety The sad part is people don’t notice that there are fewer cars on the roads, just more bicycles and they hate bicycles.

More about the idiot in the UK who hit a cyclist and then bragged about it on Twitter. Emma Way Arrested For Hit-And-Run After She Brags About It On Twitter Yep, stupidity can be painful, usually when stupid people are in cars around cyclists it’s painful for the cyclist, but this time the pain was shared. And with any luck the sharing can be more painful for the driver.

Also from the UK is a story about a wreck caused by the infrastructure. Injured cyclist’s warning over road pothole danger As I posted in the first paragraph road defects can cause wrecks which heightens the need to be totally aware of your surroundings.

A South African hit-and-run is solved. Hit-and-run driver held for cyclist’s death The cyclists were hit in an area of the road that cars were not supposed to be on, then the car left the scene. Not something a cyclist can prepare for except or that old standby situational awareness and hit-from-behind protocols.

And those were all the links that gave me fits today.