I’m having “employee” problems, and the Feed

There are two “employees” for this blog: me and the cat. Lately we have been having difficulty getting the cat out of the bed, which would not be a problem except that the bed in question is not the cat’s bed but mine. 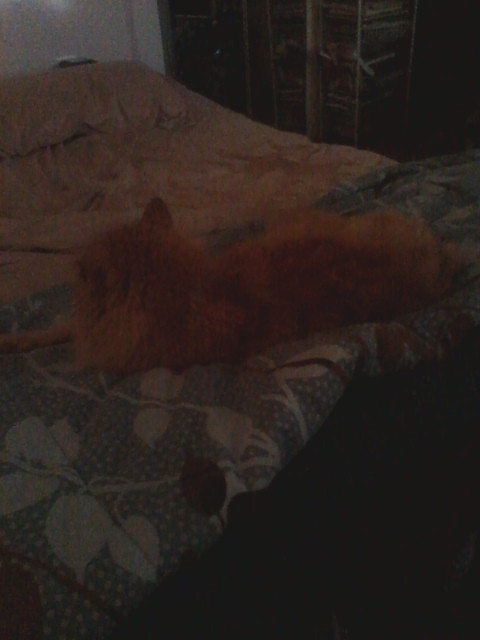 This makes making the bed difficult. I sometimes wish that Bryan (the cat) did things that were more active and photogenic, but he’s reaching middle age for a cat and has started to “settle down” a bit. His biggest interaction “bit” is begging to be let out the back door so he can run around the house and beg and scratch to be let in the front door. Apparently this is great fun for him… Cats, if they had brains they would be dangerous.

Up first a cyclist is left for dead a hard day’s ride south of WoaB World HQ in the Beautiful Suburbs of Hell. Cyclist injured in hit-and-run crash in Cedar Park When are LEO going to start treating these like murders or attempted murders? Anyway, hit-from-behind protocols to avoid or to mitigate, and get the infrastructure right to prevent. And confiscate and crush the vehicles used by hit-and-run drivers. All the vehicles, not just the one they used to hit and run with.

A peloton is left crossed in CO. 2 cyclists hit by car, 1 seriously injured in LaPorte There were 7 cyclists in that pack, and the driver still managed to “not see” and hit 2 of them? That indicates severe vision or processing problems, or anger management issues. Anyway, intersection wreck, use the protocols to avoid or to mitigate injury, and get the infrastructure right to prevent.

Just because FL is no longer the most deadliest state to ride a bike (they are still figuring for the pedestrian “crown”) does not mean that it is by any stretch of the imagination “safe” as shown in this hit-and-run. FHP asks for help to find truck suspected in fatal St. Lucie County accident | Video That bike was clobbered hard. In a bike lane by someone driving a pickup truck. I’m going to go out on a limb here and say that if the cyclist could get hit by a motor vehicle going that fast then the infrastructure was Not Right for that location. Nothing the cyclist could have done to avoid this wreck.

Another link to the story about the UK racing driver who killed a cyclist. Mobile phone death driver sent to prison I’m pretty sure this will be the last time anyone hears of this driver…

Intersection wreck in the UK. Cyclist hurt after Lancaster pedestrian crossing collision Intersection wreck with a strong indication of the weapon vehicle failing to yield to the cyclist with the right of way. Protocols to avoid, and get the infrastructure right to prevent as a pedestrian crossing is not proper bicycle infrastructure even if it was legal for the cyclist to use. And a repeat of the “seize and destroy all their vehicles” from one of the preceding paragraphs.

Infrastructure! news from NYC. “Cooper’s Law” Would Suspend Cabbies Who Kill Or Maim Pedestrians This one would have gotten the driver that was attempting to assault a cyclist with his cab and lost control, severing the foot of a UK tourist. In TX that would be a felony with a mandatory 20 years because the innocent person was collateral damage to assault with a deadly, but in NYC the cabbie got 6 weeks off without pay. More Mother of boy killed by cab pushes for ‘Cooper’s Law’

More infrastructure of the legal kind from NYC and surrounds, LI in this case. Wife of Cyclist Killed in Calverton: ‘The Laws Have Too Many Loopholes’ When you can drive across 5 lanes of traffic to hit a cyclist head on on the other side of the road and only get 6 months for the death, there is definitely something wrong with the laws.

Lifestyle and infrastructure from FL. Friends Remember Cyclist & Push For Tougher Penalties I’m still trying to figure out what headlights had to do with the wreck since the cyclist was hit from behind and had lights…

When a bicycle and a snow shovel love each other very much, this is what you get.

We already know your car makes you sick, now we know it makes you crazy, too. Commuting makes you ‘unhappy and anxious’, says ONS Interestingly enough riding a bicycle counters this effect.

Bike parking in a Sweden. Malmö Opens Fantastic Bike&Ride Parking at Central Station They even have special Bakfiets parking. 😮

Sometimes you have to be smarter than your bike computer. Beware the route of all evil in using GPS I would not buy a bike GPS that did not have a mode for avoiding hills. I’m built nothing like Marco Pantani, I don’t climb like a homesick angel, and all my bikes are made from “sturdy steel, made to last” instead of crabon and unobtanium.

Keeping the equation balanced. When N+1 meets S-1* The ideal number of bikes is when N+1 is equal to S-1. And I ask you to read the link instead of explaining that here.

And those were all the links that gave me fits today, I’ll let you try to figure out what kind of fit went with each link. 😉