Working on the car without touching the car, and car racing has started on a Wreck-Free Sunday

I have been using some tools that I have access to her at Casa de El Poeta to visualize where the frame is going on the Sprint T. What I did was measure out where the edges of the mounting flange were on the body at 3 major “landmarks”: the firewall, the back corner and the “joggle” where the body necks down between the dashboard and the firewall, because there is A Major Change in the body width between those two points. I place the pre-determined locations of the firewall and the rear axle on a piece of graph paper then located the front axle and the body mounting flanges from those and from those I located the wheels and tires. Then I put in the frame rails and some of the crossmembers that I know the locations for already because they locate something that has a specific location, mostly things like the gas tank and the front axle. Anyway here’s a picture.

Something I wanted to try was seeing if loading the picture at a higher resolution and then shrinking it down leads to a better quality picture. 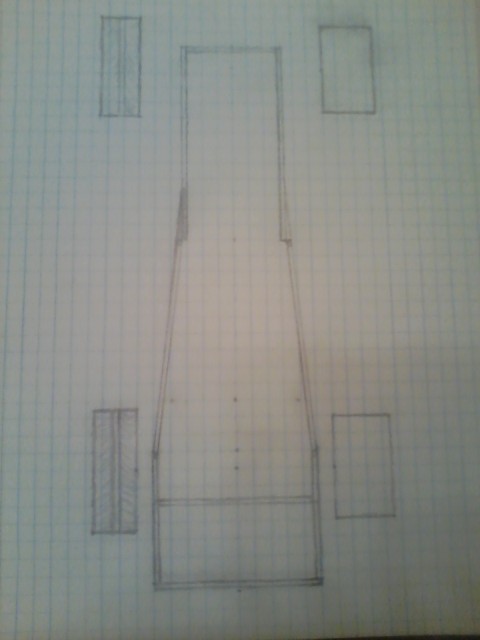 You can see two different tires in the picture, the street tires on the left and the race tires on the right The actual size in the brochure for the street tire is 26.5″ tall and 10.5″ wide but I drew it in as 28″ tall and 10″ wide. The race tire is drawn and in the brochure at the same size, 24″ tall and 14″ wide. The little circles in the drawing are the uprights of the roll cage that run between the 1.5″ by 1.5″ square lower frame rail shown in the drawing and the 1.5″ round upper frame rail that I will add later. Something else I need to add are the rest of the crossmembers for things like the transmission mount and the front mount for the rear suspension trailing link. I would like to make that the same crossmember if that’s possible because that is simpler than a transmission mount and additional bracing for the front of the rear trailing arms.

I am a firm follower of the KISS school of engineering, the Colin Chapman school of auto engineering, and the Captain Murphy school of engineering. Everyone knows about the KISS school, but not many people are familiar with the Colin Chapman and Captain Murphy schools. Colin Chapman was the legendary founder and first engineer of Lotus Cars in England and his philosophy was, “Never build two parts to do two things when you can make one part do both things.” Not many people know Captain Murphy, but most people know the general law of engineering named after him, “If something can break or go wrong, it will.” This can be synthesised into a single statement made by Charles Kettering an early 20th Century GM engineer, “Parts left off do not add weight and never malfunction.”

Something else car-related today was the Rolex 24 Hours at Daytona, one of the premier road races of the US and international seasons. This year’s race was a nail biter right down to the checkered flag, with less than 5 seconds separating second place from the winner after 24 hours and 740 laps of the Daytona “roval” course for 2819.4 miles of racing. The lower classes of racing had similar finishes for their races with the GTLM class being only a few seconds apart at the end also. Prototype Challenge was also close with the leader wrecking out less than 20 minutes before the finish of the race. The only class that did not have first and second places on the same lap just before the end of the race was GTD.

Something bicycle-related for today is there is a strong possibility that Blue has been found in a local pawn shop. I’m taking the card I was given at the time of the theft and my computer with the picture of Blue as my background picture. with me when I go to verify the identity of the bike, but honestly with as few of that model bike that were sold locally and the factory rack still on the back of the bike, according to the report, there is little doubt that this is Blue. I will have to reconstruct the serial number because I can’t find the hunk of paper where I had written it down. I remember the number was June or July of 07 making it an ’08 model and the serial was in the 200s. This time I will make sure I don’t lose the paper again when I write down the serial.

Since I have to get up early tomorrow I’m going to end this post earlier than I had planned. I really want to get Blue back so that I can start riding again with the upright seating position and see where I’m going.