I think the headache is because Mrs. the Poet has really bad allergies this year and couldn’t breathe last night. She was making these awful noises like she was dying and I couldn’t sleep until about 0600 and then the alarm went off at 0715. I mean it is really hard to sleep when your wife sounds like she’s dying next to you even when you know it’s just allergies making her head stopped up.

Remember when I wrote how nice it was to have the actual parts in hand to mock up an assembly? Well this time I remembered to take pictures (actually only one). 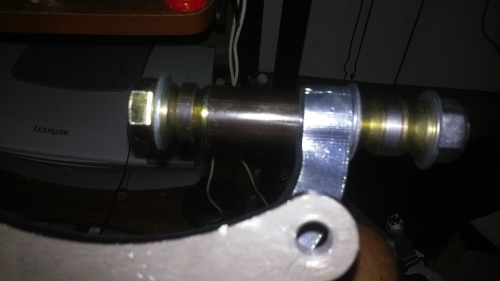 I have the bracket centered on the spindle approximating the caster angle of the axle and you can see how the tie-rod is just above where the upper bar goes? That’s because at that point the upper bar moves less than 1mm between full droop and full bump so it doesn’t have to clear by much to clear all the time, and the tie-rod likewise doesn’t move much during its travel left to right, and is closest to the bar at straight ahead. So the closest the two will come is at full bump and straight ahead. And there are enough shims in the kit to keep the tie-rod high enough to never touch that upper bar.

And the drag link? It will ride roughly parallel to the axle right behind the axle centerline never getting anywhere near anything except the pitman arm and the passenger side steering arm that it is attached to. And if I really want to get crazy I can put everything up top and nothing will ever run into anything except maybe some cones. As little as the front end of this car will weigh I don’t think there will be enough flex for anyone to notice.

And that lack of sleep has caught up with me as I’m having problems with seeing what I typed on the screen (and I probably need new glasses).

Like Loading...
This entry was posted in Daily Feed, stuff without bike wrecks and tagged did I mention I was tired?, I'm tired, mid bucket, mocking up, Thunderbolt Grease Slapper, tired blogger. Bookmark the permalink.