No game yesterday because reasons

Well game didn’t happen again this week because one critical player needs brain meds and his insurance company did the prior approval bullshit on him and he hasn’t had his meds in about a week and as a result has difficulty following conversations and formulating plans. Or as he himself put it “It’s like walking in a fog”. Since I’m still trying to keep this a PG-13 rated blog I won’t repeat what I said about the insurance company execs that came up with this process, except that “practicing medicine without actually having contact with the patient” came up a few times between graphic depictions of medieval forms of execution where death was the sweet relief from the rest of the execution.

We had a great lunch, and shared the second Giant Reese’s Cup. The hostess prepared a ton of fried rice with tilapia, and vegetables, but I neglected to get a picture of that. 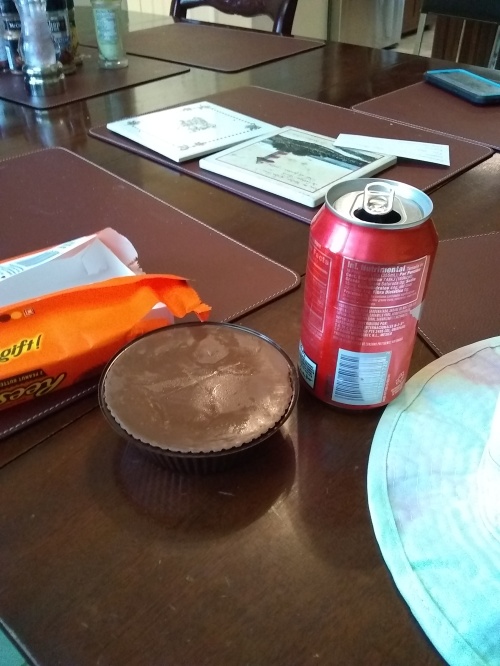 Because the GM was bored and didn’t have anything to distract her the two former boyfriends got our eyebrows “done” with tweezers, well eyebrow changed to eyebrows in my case. The monobrow that extended from forehead to the tip of my nose was subdivided into housing lots by plucking a street down the middle. In not as colorful terms where I used to have one eyebrow and a hairy nose I now have two eyebrows and a bald nose. I’m not showing that in case my bi-eyebrowed doppelgänger reads my blog and wants to make an angry comment about how he looked better and I should quit copying him 😈. [Sheldon Cooper] Kidding of course, he’s never left a comment about either of our looks. [/Sheldon Cooper]

On another front I need to contact my bank about doing a temporary increase on my debit card to infinity so it doesn’t get declined when I go pay my taxes. That would be embarrassing to say the least. Since the one tax office is closed until next Monday that errand will probably have to wait until Friday, so I can get everything dome at once.

And I really need to get some practice time with the new model-building tools so this seems like a good time to take a break. I know I write fascinating prose 😹 but I will return tomorrow.