I really need to be doing something

Seriously, something, anything, that results in some physical object I can show as a result of my labors. I’m getting close to having the bits and pieces to make the Mini Sprint-T, but I need to know where a few more things go on the real thing before I can make the model. And I realize that one of the purposes of building the Mini is to help in visualizing where $#!+ goes on the full size version, but I still have to have a clue about what I’m doing with that before I can make a scale version. I have the LS engine, albeit the LS7 instead of the LM7 that I will probably be using but in 1/25 scale the only visible difference would be the intake manifold.

And this is the LS7 engine. 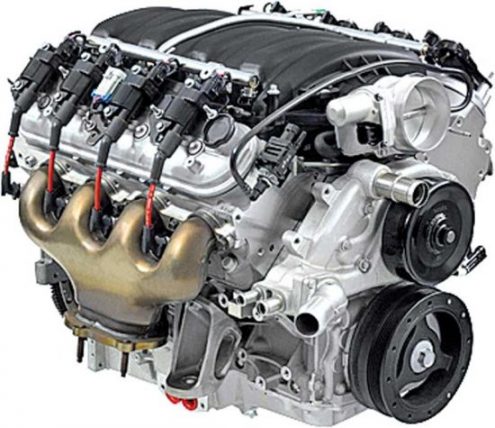 And in that picture of the crate LS7 you can see where I’m going to hang the bracket for the alternator, off the three threaded holes right in front of the engine mounting bracket. Still don’t know where I’m going to put the tension bracket, but there’s still time for that. But it is also easy to see that the truck engine in the top picture has a much taller intake than the 7 liter Corvette crate engine in the bottom picture. This gives the two engines comparable low-RPM torque below 4000 RPM in spite of the displacement difference as this is the RPM range the truck engine is designed and tuned for while the Corvette engine is intended to make its rated 505 HP around 6000 RPM. So, really for the application I’m building for the truck engine with the tiny turbochargers I linked to a few posts back is superior to the sports car engine with 1.7 liters more displacement in having more power where I need it. And it’s $14000 cheaper than the sports car engine, WOO! More power where I need power, and cheaper to boot, screw you expensive prestige engine. Also the as-installed truck engine is going to be pretty much stripped down as much as the bottom picture with the alternator hanging off the passenger side of the engine and some kind of electric water pump and that’s it.

But since they don’t make resin replicas of truck engines and they do make replicas of the Corvette engine, for the purposes of the Mini Sprint-T I’ll make do with the Corvette engine, and throw a cover over the intake manifold that will simulate the extra height of the truck manifold. Sorry for thinking out loud through the keyboard again, but sometimes it helps to put my thoughts into a tangible form.

Tagged doing something, Making the world a better place by DIY, making things