Having “fun” with things

I was playing around with the nose piece last night because I’m the only thing moving after 0100 or so. This gives me more room to work with stuff like checking the fit of the nose compared with the body. Last night I mocked up the nose at full width just to see how it fit before modifications. The answer was “not good”. Seriously the full width nose is wider than the T-bucket body. I even took pictures.

And getting a good comparison to the body width. 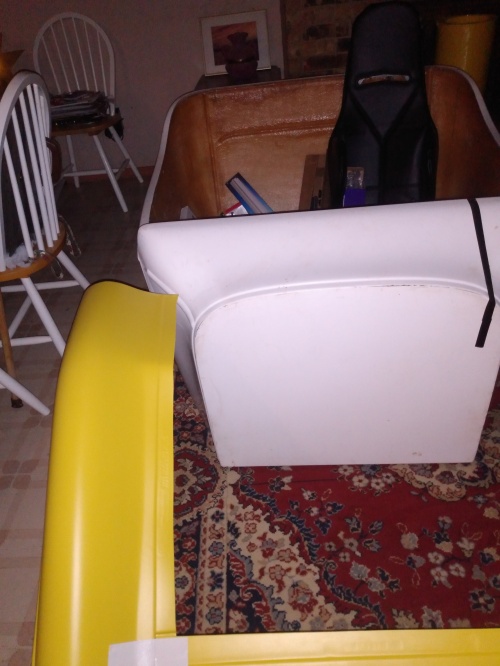 And the other side without moving the nose or body from the previous picture. 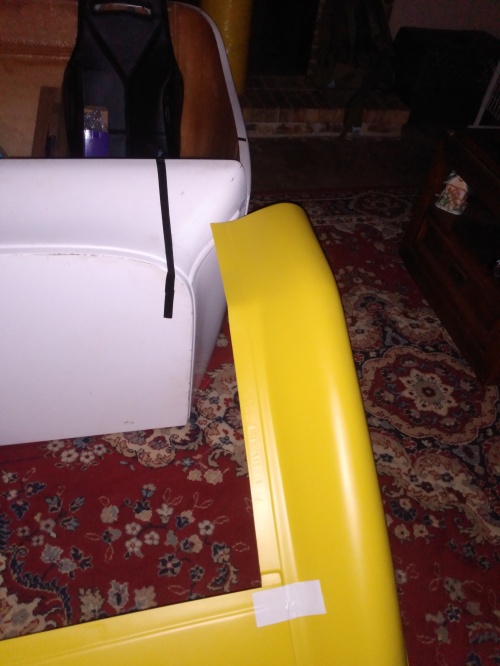 And after moving things around to make room the nose as it would be in relation to the body. 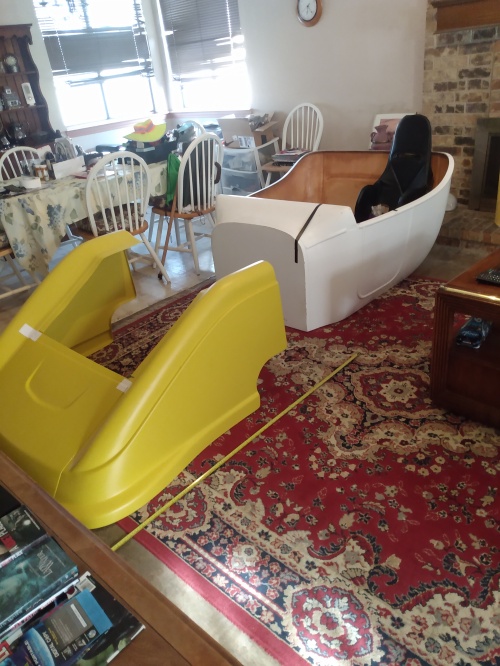 And the nose compared to the body from the other side.

And if you don’t have a car being built in your living room, why not? Do you just not have a car to build, or do you think cars should be built in uncomfortable spaces? Anywho, I’m doing some of the mockup in the living room because people have stacked a bunch of stuff in front of the door to the garage and also because my garage is where projects go to die of neglect and lack of parts. I have more parts coming for the Sprint-T as soon as they get off the boat from China, honest. So as long as I keep the project in the living room I keep the project going.

Also, I checked with the mock radiator and it almost drops through the space where the filler panel goes across the gap between the sides. On the car the sides are flush against the ends of the radiator so there will be a lot cut off the filler piece to keep the filler piece the right width to fit flush with the depressions in the sides. Also I know from the catalog the radiator filler cap is located on the driver’s (left) side of the car with both hoses on the passenger side. There is a slight possibility that I might have to make the center panel from the roll of HDPE plastic visible on the fireplace if the cut lines go through the decorative embossing on the filler piece. Edit: several hours of measuring later the amount I need to cut off is just outside the embossed decoration by less than 1/8” each side. The filler piece will fit flush to the nose sides with the radiator flush to the inside of the nose sides.

Now the black strip of tape is where the steering column goes inside the car, and also the driver’s centerline for mounting the seat which is also visible inside the car in about the place it fits with me in it. So, looking from the front in the third image you can kinda see where I would be if I was sitting in the car. My skinny butt fits with no problem but my shoulders are a major squeeze to fit still despite how much I have been beating on the rib restraints. I have already posted pictures of me in the seat post hammer-fest on the rib restraints, back a few weeks ago.

And with all the pictures I have used enough bandwidth for today so posting now.

Like Loading...
This entry was posted in Daily post, Department of DIY and tagged building a car in your living room, doing mockup, modern-day track nose. Bookmark the permalink.