And by “It” I mean the steering box that has been on backorder since early June because of the Stupid Virus. I’m changing the name because the existence of COVID19 seems to make people stupid, besides what it did to my employer and the GOP. Anywho, this is a picture of it below. 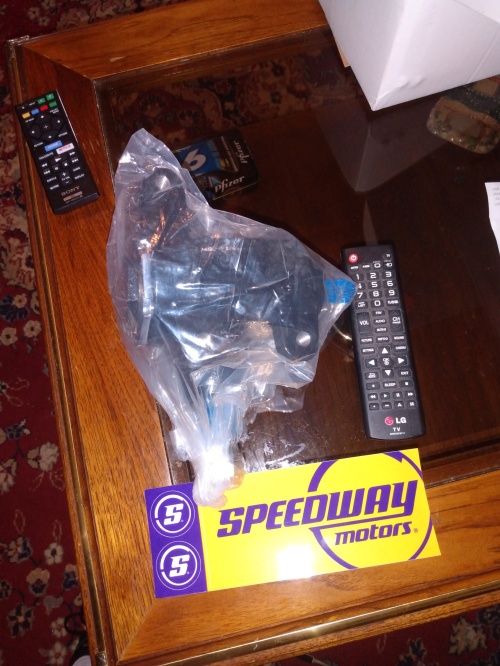 I’m keeping it in the plastic bag for the nonce, having learned my lesson about surface corrosion from the spindles I bought a few years ago. I may be slow, but I’m not stupid. And FYI that thing is HEAVY! no, it’s HEAVY! That tiny chunk of metal has to be over 15 pounds (6.8 Kg) which brings up the question of why they still use iron in the main casting? Probably because steel or iron is cheaper than aluminum, but then the question is why it isn’t an option since this is a repop for a part that has been out of production for five decades, the Vega stopping its run in 1977, and presumably GM stopping production of replacement parts shortly after.

Now I just need to figure out the load path from the steering box mount that was in the kit with the box, to the rest of the frame. For the application the kit was made for the box mount welds directly to the frame rail of a ’23-34 Ford. This is going to be a bit more complicated as the frame rails are either over a foot above the box or several inches below it, and beyond just holding the box in a certain place in space relative to the frame and axle there are significant forces that will be applied to the mount, off axis forces at that. That means either the mount will be very heavy and apply torsion to the frame tube, or the mount will have to be braced from the other side of the frame. Since there’s nothing in the way of the mount going to the other side of the frame I’m going with that unless and until something else has to be put in the space between the radiator and the front axle. The radiator will be mounted slightly to the right to make the nose symmetrical and keep everything under cover, but since the tie rod and the pitman arm are both going to have to extend beyond the side of the nose it’s actually a moot point. The steering will come out of the left side of the nose because it has to, the Pitman arm will swing to the left further than the confines of the nose at full lock anyway, even the reduced amount of lock with the shorter steering arm at the spindle. The fun part now is how do I adjust the internal stops in the box to prevent the steering linkage from getting damaged by over travel caused by the steering box? Without internal stops the drag link could be overcentered and the car be unable to return to center when the steering wheel is turned the other way. Or I could use a stop on the axle that hits something on the spindle to prevent turning far enough to the right get to that point. Turning to the left the drag link hits the back of the spindle before getting to the over center point, I could use a stop on the axle that stops the spindle at the same point of rotation in the opposite direction. Hitting those stops would generate substantial forces on the steering mount, getting back to the original topic of internal stops in the steering box and the steering box mount. There is also the point that at full lock the tires will be almost perpendicular to the axis of the car. This would be useful for moving the front of the car sideways when not running, but I don’t see any practical application for this much steering angle.

And here we see yet another example of how I think, wandering here there and everywhere as I solve a problem. I’m not sure which part of my mental problems this typifies, but I know this isn’t my PTSD or depression at work, the only mental illnesses I have that I can’t blame this thinking style on. Maybe my ADHD, yes this is undoubtedly what happens when genius meets butterflies and squirrels. And since I just noticed my word count has tripped the 1K mark for this post I think this is a good spot to put this post to bed.