The parts I bought this January finally arrived today. The backgrounds are the business cards for the company I bought the parts from, to give you an idea of scale for these parts, and I’m using “scale” in two forms for this. The parts are for the Mini Sprint-T in 1/25 scale. 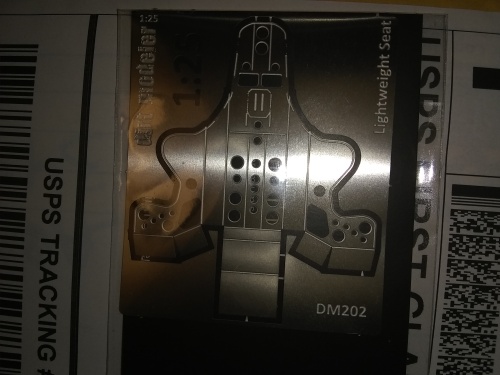 Again, the backgrounds in the picture, the dark part, is the business card of the company that I bought these from. They literally get lost on a standard size business card. And there was a note inside the delivery envelope saying the guy that runs the whole show for this company just got out of the hospital after 2 months. And those thin pins coming off the top row of rod ends fit snugly in the stainless steel tubes I bought to make the links for the 4-link, and the plan is to add a tiny drop of solder to the end of the tube to hold the rod end and jam nut in place. The jam nuts are those hex-shaped things above the rod ends.

And I need to get to bed, so the blog post needs to, too.

Finally getting some work done on something

It wasn’t much, but it took a while to do and then more time to photograph. I did some experiments with the nippers and building junctions where tubes intersect on the real frame to see how close I could come to IRL appearances with the tools and materials I have.

The one we are looking at here is the one I did first with the non-flush side of the nippers, where I failed utterly in getting a smooth junction. That is the one that is on the right side of the picture, the gaps are huge.

Again the junction in question is on the right side of the picture, this time the smooth side of the cut from the flush cutting side of the nippers. This is a much smoother junction than the other cut but still has undesirably large gaps. This is a very simple to construct junction compared to the first junction. Just do the flush side towards the work piece when making the cut and stick it in there facing the junction.

This time I cut the flush side towards the work piece at a 45° angle and put those together like a mitered joint and glued the vertical on top. This was the smoothest junction yet, but there are still some large gaps showing. I have one more junction to do before moving to other cutting methods, the 45° like the mitered joint but against the vertical instead of under it. I’m cutting and gluing that joint between sentences of composing this post. And I’ll post the picture in this post tonight if I can. 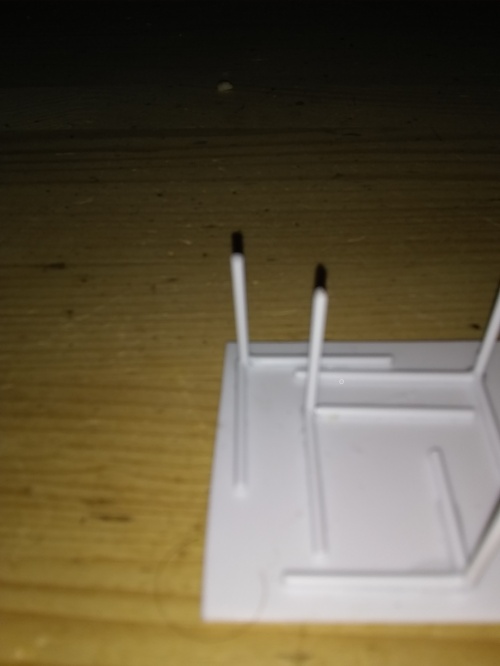 This is almost as clean on the mitered joint on the outside but there is still a huge gap on the inside because the geometry just doesn’t work to join round stock with straight cuts. The mitered joint with the vertical member on top was the best so far as gaps and other fitment issues are concerned, but still not even close to what can be seen in the real 1:1 world. Basically I need to use rounded cutting tools like files or sanding sticks to make the joint fit like it does in the 1:1 version.

So the next step is to use the miniature files I bought a few years ago for this project to cut some “copes” in the stock to get better looking joints. Or just call it an engineering model instead of a display model, and don’t worry about the appearance. The lengths of the members would be outside to outside, or inside to inside depending on the orientation of the joint and would be made with the flush cut side of the nippers against the work.

What do you think?

OK I got some more raw stock for the Mini Sprint-T yesterday. Basically I got 0.040″ thick styrene for making brackets and steering arms and the spindle backing plate where it connects to the axle. The amusing part is the minimum order was 4 sheets of which I will use maybe half a sheet if I’m profligate in my layouts, and when they packed it they included an extra 2 sheets to “protect” the actual material I paid for. So I needed less than ½ of a sheet, bought 4 and got 6, for a total of 12 times as much material as I need. The other funny part is unlike the rest of the raw stock I got this was sent in a padded envelope instead of a cardboard box stuffed with crumpled paper.

This sheet material is going to model structures that will be fabricated box structures on the real car like the engine and transmission mounts, or actual parts that are just that heavy because of the stresses involved and the critical nature of the part like steering arms. A major part of model building is “representation” rather than actually reproducing something in miniature. The exhaust system will be a good example of that for the Mini Sprint-T. The 1:1 version will have what is called a “tri-Y” or 4-2-1 exhaust system that improves torque below the torque peak but doesn’t change peak power much. It doesn’t get every last HP at peak though, so drag racers don’t use them much, but road racers, short-track oval racers, and autocross racers spend more time well below the torque peak and the tri-Y manifold is popular in those applications. Well this is a type of manifold that requires a large amount of fabrication for smooth flow, and ditto on the fabrication level for the scale version, and because of the difference in materials is actually easier to build full-scale than in miniature. Well to get around that I’m going to use the fact that the exhaust is going to be wrapped in insulating material to hide the fact that I’m just going to butt-join the rods representing the tubes of the manifold and not build the streamlined joints. The work would have been hidden by the wrap anyway and this saves a lot of work that will never be seen. The real tricky part will be the wrap, I’m still experimenting with stuff for that. My thoughts are whatever I use will require a paint wash to get the color right so it will have to be something that takes paint well. But that is something that comes much later in the build, so I have time to figure that one out. The current leader for that is hypoallergenic bandage tape, but I still need to do the paint test. And like I wrote, the actual wrapping will be in the future.

But at any rate what I have now will fill in for complicated fabrications that would be a nightmare to produce in scale and not be discernible from cutting it from a single piece of heavy sheet. End of the current chapter. Next will be actually building the frame, which is like 80% of the build for this model. There are a few dimensions I’m not entirely positive about, some of which need to be hashed out during the model build because I can’t import the parts to my CAD program. The other ones are because I have to build to a rulebook that’s a bit vague about certain things like roll cages, and another rulebook that is more than a bit vague about the same things, and doesn’t mention anything about it except that for my car it’s required without any dimensions or tubing sizes. That is a really big help GoodGuys. “All Roadsters must have a roll cage.” That is verbatim everything printed in the rule book about roll cages. So what I’m doing is using the SCCA Solo rule book for roll bars and applying the rules to the rear hoop, and treating the car like it weighs 2500+ pounds, when I’m looking at maybe 1800 if I run iron heads on the SBC engine and something along the lines of a 4l60E transmission and the Ford 9″. Now if I get a quick change I can get the TH350 and take about 45 pounds off the car because I can change the gears to something really tall for the freeway and gas mileage without having to compromise to get the right gearing for racing. Just jack it up to unload the gears, pop the rear cover off, and swap the race spur set for the highway spur set and refill the rear end then go. And the car will be slightly quicker racing because the race gear doesn’t have to be compromised because of 9″ gear availability or having to get good highway mileage. But the other side of that is quick changes are much more expensive than the common 9″, and other junkyard rear axles are even cheaper and “close enough” on the gear ratio. But in the model I will be using the quick change, because I have 4 of them and no 9″ Ford in that scale. I have 2 of the V8 size housings and 2 of the 10″ ring gear size housings, but no 9″ Fords 😐. And you can see how decisions for the 1:1 car affect the 1:25 model.

And it’s getting late and I should be going to bed soon.

Quick note on the Pentastar engine model I mentioned

In the last post I mentioned I had a model of the Pentastar V6 for designing the frame. I want to emphasize this is a drafting model of the space the engine occupies during operation, so that I leave enough room to get components out of damage range when the car is being driven. The actual engine is not that big. I’m just trying to make sure the car can be controlled while I’m driving it.