I found another problem

I was doing a little SWAG on the Sprint-T and tires and I came up against another problem. I can only hook up so much HP no matter how big I get the tires, because of weight. Traction is a function of weight and tires, and there is a hard limit to traction with a car as light as the Sprint-T trying to use UTQG 200 treadwear tires. I can get a little more power to the ground with sticky race rubber, but depending on the weight of the car I’m looking at 300 to 500 HP without boiling the tread off the tire before getting the pedal to the metal. More than that and I’m never getting my foot to the floor.

What I’m looking at is with the Subie engine and the T5 transmission I can stop cranking up the boost around 300 WHP, with the Pentastar V6 and the 8 speed transmission I can stop trying for more than 375-400 WHP because that transmission just weighs that much, the LS3 and the 4l70 I can pretty much leave in stock tune, and the LS7 I will need to put a block of wood under the gas pedal to keep rear tires on the car unless I’m running the softer compound of the race slicks I have available. Street tires will require really feathering the gas to maintain traction with just the stock 505 HP tune.

Now these are just what they used to call “back of the envelope” calculations but they are the best I can do with the data I can get, and the low precision of the data. Seriously I’m looking at ±0.1 G precision on a 0.8G predicted grip for the 200 wear tires, or 0.7 to 0.9G and a huge difference in performance between those numbers, so lets say we are talking about the LS7/3 we are looking at maybe 400-430 WHP on the low end, just shy of 500 at the high end. And as far off as I was on the unsprung weight at the front end I’m not putting much faith on these numbers either. But if the data is correct and I used to correct formulas, If I’m running an LS7 then I don’t need to use the dyno for anything more than fine tuning for gas mileage and verifying the stock tune is working correctly. Pretty much the same for the LS3 except I have more room on the other side of the equation, I could get away with maybe the 480 HP tune, but not the 525 HP tune.

And I didn’t get much sleep last night, and I’m starting to get a headache, so bedtime.

My Warlock died yesterday and more on a Wreck-Free Sunday

Yep, my poor Warlock was severely killed (along with my apprentice NPC Bard) in the kinky D&D game yesterday. I was down to 6 HP when I got hit by a 34 HP attack centered on me and my apprentice because we were not in the room in an earlier attack that made the entire rest of the party magically pregnant with the half-siblings of a half-dragon daughter of a Green Dragon. She was pissed at us for not being there to get pregnant during that attack. I managed to get off a few good shots but a 5th level Warlock going up against even a half-dragon just ain’t gonna work. And so, I died.

Fortunately in the party loot was a clear bottle with a lead stopper filled with orange smoke and flashing lights, a “bottle of djinn”. This djinn was fairly powerful in that he had enough moxie to do two resurrections and bring both me and my apprentice back to full life with no loss of levels or XP. The senior member of the party then ordered the djinn to be free, much like the climactic scene in Disney’s Aladdin. We did this because we only had control over the djinn for 24 hours and if he was powerful enough to bring two characters through a full resurrection he was more than powerful enough to do a TPK in a single attack. So, “bring my friends back to life, and be free” seemed like a good choice.

On the Sprint Cup race today Martin Truax finally got a win this season after practically pounding the door down all season long with the Furniture Row Racing team. They won simply by virtue of having the stronger car pretty much all race long, and were able to outrun Happy Harvick at the end. This puts him in for the Championship Chase at the end of the season. I have liked Truax as a driver since his days with Michael Waltrip Racing, and was highly disappointed when MWR let him go at sponsor request, even after winning races. Well now he won driving for a single-car team with a tiny fraction of the resources of the big name teams. I mean until now had you ever heard of Furniture Row Racing?

With the parts that arrived last week detail design work on the Sprint-T progressed a little further as now I know how big the things holding the rear axle from moving relative to the frame are. Knowing this I know how much leeway I have to provide to keep them out of the bodywork and frame, and where they have to connect to the rear axle so that the coilovers don’t hit that. Having the actual items in my hands to measure makes things that much easier to draw. The issue I’m now facing is that I need the instant center for the rear suspension to be above the rear control arms slightly so that the rear axle doesn’t chatter under heavy braking, and when you throw that in with the “don’t hit the body” during suspension travel, or violate the “nothing lower than the main frame rail or the rims” parameter that is one of my basic rules for building a street vehicle it kinda boxes you in.You might have noticed that there was a bit of a bow in the control arm in the picture last week to accommodate the mount for the coilover unit. 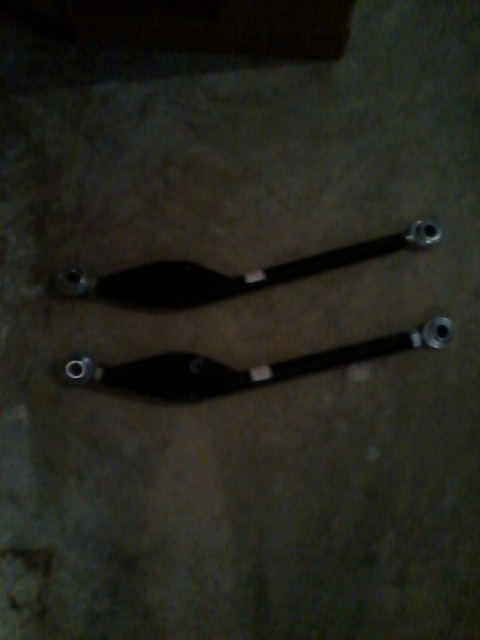 This means I can’t just run the part between the rear end and the frame or it will run below the frame rail as this is a dual-use part. Not only does it locate the axle fore and aft, it also controls the up-and-down motion by mounting the rear springs, and the anti-roll bar bolts to the bottom to control roll (obviously, part of the name of the part). Why let a part do only one thing when you can use it to do three jobs at no increase in weight? I think it was Colin Chapman (founder and first designer for Lotus Cars) who said that, but he might have been quoting an earlier engineer.

I just returned from evening service where Mrs. the Poet was installed to the board of the church as a member-at-large for 2 years. It was quite moving. It was also rather frightening on one level, as the oath of office was basically in invitation for your gods to hunt you down and kill you in the most painful way possible if you screw up. I don’t know if that was the intent of the oath of office, but that’s surely the way it came out. I guess that is an effective way to ensure that screw-ups will be unintentional.

And I should let this end here as I have already gone a bit over my planned word count. And I’m having trouble putting the abstract concepts into concrete words.