I’m a little choked up on a Wreck-Free Sunday

OK I just shut the idiot box off after watching the final 3 hours of Mythbusters on the Science Channel. I have to admit to being a little choked up about the end of the series, I was still recovering from the wreck when the show started, trying to force my mangled leg to do what I wanted it to do. I have been watching it pretty religiously ever since (I missed a couple seasons in first run along the way because of D&D, but I caught them in repeats). And now after blowing up one last cement mixer truck it’s all over. I read a rumor that the reason the show was ending was not low ratings, but because Jamie got a super-secret contract with the Navy to do super-secret things. I’m going to count that one as “Plausible” because Mr. Hyneman’s previous life experience before doing the show, combined with all the strange stuff he has done making the show, would make him a superb asset for numerous covert operations. Not Jamie out in the cold doing the covert stuff, he’s way too well-known to do that, but he would make a hell of a “Q”-analog for a US James Bond (who was a commissioned Royal Navy officer, BTW).

I haven’t heard any rumors about Adam, but he’s bound to find something to occupy his time in early retirement. I follow him on Twitter and he doesn’t seemed to have slowed down much since the show ended, he might just keep the Mythbusters stage show going for another 14 years minus The Walrus.

What I have been doing was building those engines I mentioned in an earlier post. Then I shot a comparison between the LS7 and the 383 SBC from several angles. Both engines are the same scale.

You can see that the deep sump on the resin kit’s wet sump pan is going to make fitting it under the hood of the Sprint-T tricky. I’m probably going to modify the kit pan to resemble the dry sump pan on the crate engine for a lower profile and better oil control IRL. 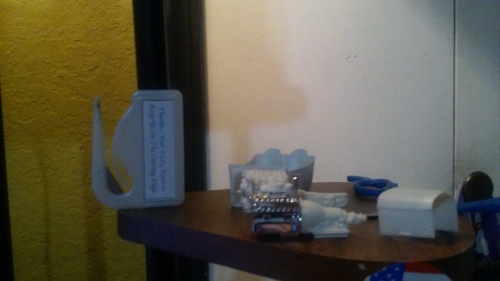 Without the Front End Accessory Drive (FEAD) the LS7 is only slightly wider than the SBC, but that alternator bracket is hanging way out there past the hood side. Putting the alternator over where the AC is on the Corvette FEAD and tucking the power steering pump up closer to the block would get everything under the hood after completely re-engineering the entire FEAD. I love that acronym, it just blows the spell-checker’s mind.

You can see the LS engine is just a touch wider than the SBC from these pictures, when the stock FEAD is left off both engines. The FEAD I’m building for the SBC will tuck the alternator up against the passenger side of the engine below the head, and also the power steering pump against the driver side of the block. I’m sure I could do the same for the LS7 engine, but that would require changing the water pump to one that rotated in the same direction as the crankshaft.

And I have to get up early tomorrow because I’m out of milk, coffee, and yogurt. That’s three things I can’t function without for very long, so I have to get up early enough to catch the mid-day pass so I can get to the bank for money, then get to the store for supplies. I have enough java to run one reusable filter through the Keurig, and that’s it, then I have to use the artificial creamer. It’s just awful, I tell yas…