My fingers are freezing, and the Feed

I don’t know why, but for some reason my fingers are painfully cold. The rest of me is quite comfortable but my fingers feel like I have been swimming in ice water.

I took the ham bone from the Thanksgiving feast home and used it to make a pot of beans today, and they were pretty good beans if I do say so myself. This one was a “thrown together” meal with a little of this and a little of that and a dab of something else. The ham had enough salt so that I didn’t need to add any to the pot. Throw some garlic powder in and add some cayenne pepper and a tiny touch of black pepper to get the flavor going and voila! Dinner.

Still in CA we revisit an assault on a cyclist with a knife. Video: Man Stabs Cyclist Who Made A Simple Request, Police Say

Not out of CA yet a scooter rider gets hit in the bike lane. LAKE ELSINORE: Scooter rider injured after being struck by van They don’t say if this was a moped scooter or a mobility scooter, but the narrative suggests a mobility scooter since the vehicle was being riden ninja at night. I include this because the visibility and speed and location are exactly what a bike would have had.

Going from sunny SoCal to the Great White North. Cyclist injured in collision with truck on Quinpool Road The location was given as an intersection, and the bike shows impact from the right front so my SWAG pn this wreck would include a stale green and a driver looking at the light and not the street. That would also include the witness description of the driver reaction to the wreck.

Over in Jolly Olde we get a blatant example of anti-bike bias when a cyclist is hit and injured. Woman driver who hit cyclist is filmed telling injured man: ‘I’m pregnant and I wear glasses’ If she had been wearing her glasses she might have seen the cyclist… Also Video: Driver left hooks cyclist on upgraded Cycle Superhighway

Some cyclists get a little “testy” after fighting with cars all day long for road space. Video: Moped rider crashes on bike path as cyclist slaps him I do not in any way condone physical assault on other road users.

Meanwhile in Oz. Call for bike safety fix after woman is fined $1000 in death-dooring case and Mother fined for cyclist’s ‘car-door’ death

This would be so cool. Bono Auctioning Off Bike Ride In Central Park For AIDS Charity

And these two links say so much about cars. Bad Street Design Kills People and Earth’s Car Problem Needs a Strong Mix of Bike Activism and City Hall Cars dominate the landscape and the transportation and the mode of death.

And I’m all outta links, and I’m ready to get outta these clothes because I spilled some sardine sauce on the shirt yesterday and the smell did not come out in the wash. So I have been smelling fish all day. This has made me super popular with the kittens, as you can imagine. But eventually they lost interest in me as they discovered there was nothing they could chew on and went to find better laps to sit on. 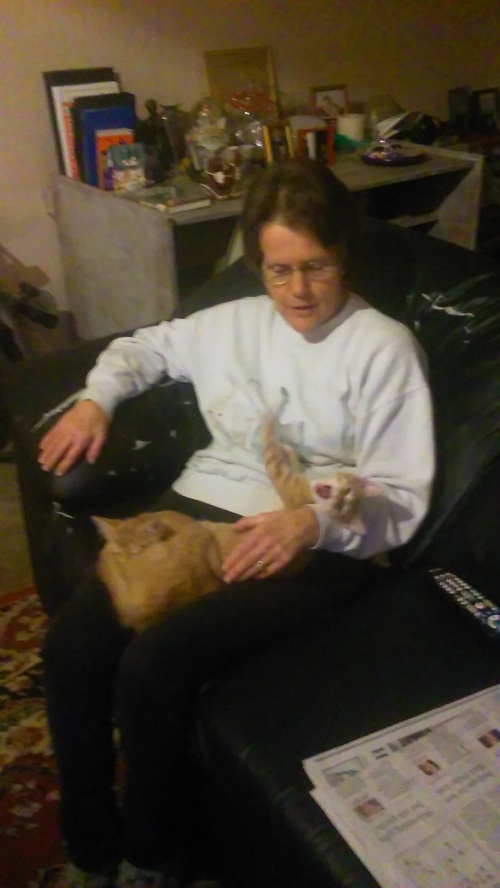 I’m having a case of the Mondays, and the Feed

Mrs. the Poet being home throws my mental calendar all off. I make my beans and rice every Monday (except the weeks when I have to make it on Tuesday) and normally start right after breakfast, but because she was home I was not thinking “make beans” I was more like “we are having roast veggies tonight with dinner”. So having Mrs. the Poet around is like “Mrs. the Poet =/= Bean Night” in my head even though I know it is still Monday. And I have to say having my MP3 player hooked to my sound system is something of a revelation for me. I have been browsing by albums lately and for some artists I have as many as 6 separate albums loaded. The depth of my music collection even surprises me on occasion. I just wish I could have gotten my Pink Floyd converted and loaded before I ran out of space, I really want to be able to hear “Ummagumma”.

Amazingly enough I don’t have many links this morning as most of what populated my Feed Folder was motorcycle wrecks, and almost all the wrecks were from North of the (Canadian) Border.

Speaking of that, first wreck is a SWCC two links from East Canuckistan. Cyclist killed in morning crash and Cyclist Dies After Burning Red Light And that’s a bit of slang I haven’t heard before for going through a red light. OK, intersection protocols to avoid with emphasis on not running red lights to avoid or reduce damages, assuming it was the cyclist that ran the red and not the sole surviving witness and operator of the weapon vehicle, and get the infrastructure “up to Dutch” to prevent.

Next up another demonstration of the destructive power of motor vehicles as NJ shows NY how it’s supposed to be done. Woman Fatally Struck By Driver At NJ Farmer’s Market Victim was dragged 3 blocks by the weapon vehicle after it went through barricades denoting a pedestrian-only space (motor vehicles allowed for deliveries and trash pickup outside of pedestrian time). Yep when idiots drive light armored vehicles they do idiotic things. Still, the fact that a sober driver killing a pedestrian can be charged under NJ statute and caselaw that would have only gotten a ticket in NY because of their statute and caselaw, just goes to show how seriously warped out of normal NY statute and caselaw has become.

Road rage on the bike path in the UK. Witness appeal after cyclist assaults man who was on bike ride with daughter I’m going to file this in the folder labeled “Cyclists are human beings”. And then try to forget it.

Infrastructure! news via Facebook, link is supposed to be visible even for people not on FB. A Bicyclist in a travel lane is not an emergency! Advice to drivers to not call 911 if someone is riding a bicycle.

From the cops-getting-it-wrong-again department. Montreal police warn cyclists to stay off road at St-Denis underpass For those not clicking, this is the underpass where a female cyclist died after getting a ticket for riding on the very same sidewalk cyclists are getting ticketed for not riding in now. This is one of the few sidewalks that is legal for riding on in Canada.

And Lifestyle from Canuckistan. Two years after cyclist’s death, Edmontonians plan to honour him with unique memorial A tiny parklet made from a converted parking place to honor a cyclist? Brilliant!

Proving that bike bigots are no easier to change than race bigots. Washington Post columnist takes bike ride through D.C.

And those are all the links about bikes that I could find today that were not hopelessly out of date.

We need harsher penalties for killing with motor vehicles, and the Feed

While I was filtering the Feed this week I noticed a disturbing trend in the articles about the criminal aspects of wrecks: Even when drivers are guilty of using cars and trucks as weapons against cyclists and pedestrians, there is little to no consequence for their actions. If you shoot someone even by accident, you go to jail for a substantial period of time, but if you hit someone on the road, even on purpose, the victim is blamed for being there to get hit most of the time, and even when the driver is found guilty as long as they had not been drinking or doing drugs the punishment for what they did would have been compared to shooting a dog, sometimes even less than that. There was one article this week that the driver got 10 days in jail for killing another human being because he wasn’t drunk and he had a valid driver’s license.

Up first is more on the cyclist hit head on on a usually desrted stretch of road in CA. Police: Cyclist killed by street racer And as of this article they still hadn’t arrested the driver of the murder vehicle. See what I was writing about?

Another update, this time on the cyclist that got caught in trolley tracks and thrown under a bus in Boston. Bicyclist Killed In Bus Crash Identified Nothing much I can add to this one except that when there is a dangerous piece of infrastructure there should be something on the road to keep bicycles from using that part of the street, like a curb or a rough textured pavement that lets cyclists know they are getting x number of inches from a dangerous situation. When you are in a situation where the roads can kill, and traffic can kill, either make the roads non-lethal or do something so that you don’t have to watch the road surface as much as you watch for traffic. With all there is to watch for in traffic only a super man has the ability to divide attention between all the things that need to be watched and be able to react to all of them.

In what must have been a really bad day for him, a bike messenger beats up a limo and threatens the driver after getting knocked off his bike. Cyclist Arrested After Road Rage Limo Smash One “witness” claimed “he picked up the limo and heaved it into the nearby Kinkos” , something I find doubtful unless Peter Parker has given up his job as a news photographer for being a bike messenger.

More on the bikes hit in Boston, and on the constant struggle for space which bicycles end up on the losing end of the stick. Sharing The Road: Bikes & Cars In Annual Struggle The law is clear on this, why is there any struggle? Bicycles get a lane of traffic just like any other vehicle. The only reason I can see to “struggle” is bicycles are slow and their users fragile and unprotected, while motor vehicles are quick, and for all intents and purposes an armored vehicle against a bicycle leaving the driver impervious to the effects of hitting another vehicle no matter what it is, unless they go under a semi.

Wrapping up the wreck reports is a report I can’t read as I am posting to this blog. Sydney cyclist dies, three others seriously injured on M4 I can read the synopsis in the Feed and it ain’t pretty. A truck hit 4 cyclists from behind, killing one and severely injuring the others. More than that I don’t know because the Feed is a collection of links with pertinent lines from the article that match the search string included in the article description.

Final link, a memorial ride for the woman that was killed getting the door prize in NYC. Memorial Ride Tomorrow for Bronx Cyclist Killed by Bus The picture that leads the article shows the victim in her cycling garb (less the cold weather gear she wore) that she was wearing the day she was killed.

And that’s everything for today.