I noticed that the December snowfall on WP sites missed my blog this year in spite of my selecting that option several years ago. I mean what’s up WordPress? I looked forward to having snow this year because it was “normal” to have snow for Christmas in the blog, even if we never saw any here in TX.

And I checked settings and now the snow effect is only available with a business site, not on the free sites like mine. Well it seems like the nice thing are only available to people willing to spend money.<deep sigh>

Tagged blog snow, getting back to normal, snow

We have sneaux in the Suburbs of Hell

If you follow weather news you might have heard we got some Sneaux in the Beautiful Suburbs of Hell. Well by the standards Mrs. the Poet and I grew up with we got a light dusting. But considering the last time we had snow visible on the ground I had a flip phone, this is a LOT of snow for around here. 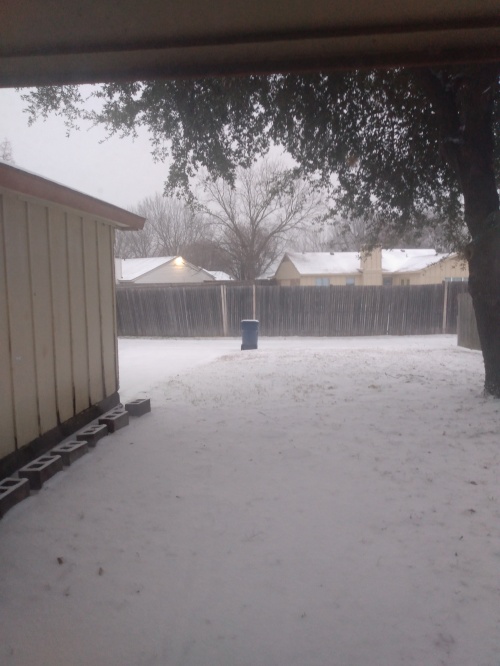 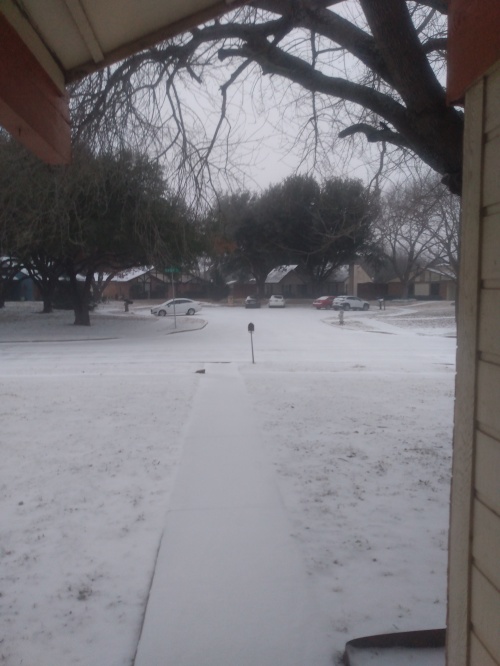 The temperature has never gotten above 20°F today with wind chills hovering around and below zero°. Like I wrote earlier the last time it snowed I was using a flip phone for pictures. 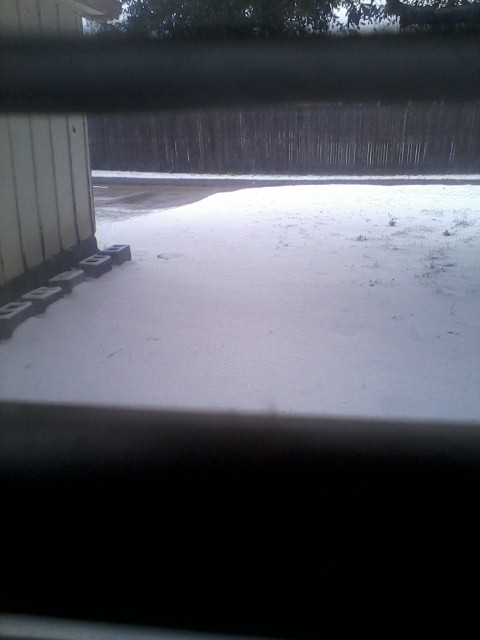 We have about 2″ accumulation as I post this, with more on the way.

If you know where I live then you know we got some snow for the first time in years. Not snow as in snowball fights and snowmen or -women, but snow as in if you look in the right direction and there’s a dark background you might see it falling, snow. Some places to the west and south got maybe 3 whole inches of accumulation.

We got no accumulation, zip, zero, Nada. Several days of highs in the 50s and 60s including yesterday pretty much assured that the snow not only melted but evaporated as soon as it touched the ground. We got the equivalent of a light rain. And even that was too much for local drivers to avoid crashing, but traffic was low because foo’bawl on TV, so while the wrecks were spectacular and will probably make a compilation video on YouTube, they were few in number. Delivery drivers took a figurative beating, though. Lots of “black ice” out there as overpasses and bridges froze when the road that had dirt under it was clear. As a former pizza driver and ice racer I felt all their pains. I felt even worse for the places that actually got snow. Lots of wrecks out there in the boonies away from the DFW area.

We didn’t have game today, so I still haven’t had the chance to try my new stats, but we did ride to the Legless Wurm in my freshly restored Ford Americar with upgraded armor and suspension. We just got beer and whiskey and some tofu scrambles to talk over while we discussed tactics and intel about the extraction operation for the troll female teen. Since we didn’t play because we were down a player nothing important was discussed, it was mostly just a RP session. We got comfortable playing our characters, and that’s about it.

Y’all be careful out there and stay safe. I have the nagging feeling the bovine byproduct is about to impact the rotary air moving device.

Paying my taxes was a nightmare, and the Feed

Yep, I was out paying taxes today. About $3k gone in a whoosh. Several hours spent waiting in lines. I don’t mind taxes, because that’s how I pay for things like schools and libraries and bicycle infrastructure. Then I went and paid off some bills, which was mostly a case of waiting on the next bus, sometimes for over an hour because of broken busses on the route meant that the next schedule was there before the replacement bus.

Let’s open with this lovely item from NYC. Hope You’re Not Planning On Biking Anywhere Today A big part of the problem is snow removal changes depending on the chunk of infrastructure covered in snow.

Hmm. Maybe if I made a recumbent version I could get some base miles in and still post the blog? Portland software company rigs up a way to publish its blog posts by bike I need to do something, we are coming up on a year since I rode any distance over a block on a bike.

Still in CA. Law firm says settlement is reached in cyclist’s death, but Newport says nothing is final Doncha just hate it when your settlement can be derailed by people not even involved with the negotiations?

I think this is the same highway where a cyclist was killed back in 2011. Cyclist killed after hit-and-run, 2nd strike Again they blame the victim for not wearing the GITDCS instead of the driver not driving at a speed they could see to stop in the distance that could be seen clearly.

Back to America’s Copenhagen for more infrastructure. Gap Week: 82nd Avenue and Burnside

Another link on that cyclist hit from behind in PA. Bicyclist killed in Wilkinsburg identified

National infrastructure news for US readers. These U.S. Reps Want to Redefine Bike-Share Ideally bike-share would be run by transit agencies and be colocated with transit centers as well as areas of high transfer from bus to walking and destinations to serve as last-mile gap fillers.

Remember that Mythbusters episode where they compared drowsy driving to drunk driving? Ultra-Cyclist Dies While Training on Rio-Santos Road in São Paulo

This UK story deserves a Triple Facepalm! Banned driver spared jail after ‘foolish’ car chase through Nunsthorpe estate About the only good thing to say about this was the driver was sober. Having said that, Holy Crap he drove like that sober!

Also from Jolly Olde. These Moving Photos Show The Moments Before Cyclists Were Killed By Cars Long exposures with flat light and a bright headlight leave a ghostly impression.

And I’m outta links and ready to crash, into my bed…

Happy 50% off chocolate day, on a Wreck-Free Sunday

Today and tomorrow are the days that are usually the best for getting cheap chocolate candy, most of the grocery stores in my area have hacked prices by half or more. Just stay outta my way. I WILL run you over.

The RPG group did not have a good night last night, as we lost two players to personality issues. My warlock could not hit the broad side of a barn with his eldrich blast, I had a bad case of bad dice. My perception and listen checks came out great, I could see and hear all kinds of things that the rest missed. So it averaged out. Also I finally had a chance to use my “you ain’t dead” cantrip spell, twice. Of course had I been able to hit my targets better that would not have been necessary.

I did the service this morning, as some of you may have surmised from the post from last Saturday entitled “Sermon”. I had some technical difficulties with my laptop in that while I could expand my active screen to both the laptop screen to the HD TV we have on one wall, and get audio out through the HDMI cable, I could not get the videos to play on the TV while leaving my sermon up on the laptop screen. They would not drag over to the TV and nothing I did would cause anything I had open on the laptop screen to move to the TV. The workaround was to mirror the display on both screens, have the remote for the TV at the podium with the lap top, and switch the TV off when I had to read the sermon and back on when I had a video to show. The problem with that was I could not read the sermon while the video was showing so I had to read stuff before that I was supposed to read during.

Now I have to get my head together for a sermon due the end of next month, for April Fools’ Day. My previous services on that day have varied in quality between legendary and Stoopid. My Banishing Chaos services tended towards the Stoopid, but some of my embracing chaos services tended to the legendary. The one where I used children to call the elements as Yakko, Wakko, and Dot Warner with one of the mothers in the church to be Hellooo! Nurse was one of the more legendary services I have performed. And the Meditation that turned into a game of Dodgeball also falls under that legendary tending to Stoopid or perhaps Legendarily Stoopid. So I have a high hurdle to surmount of my own creation.

I leave you with this link to a very pleasant video of people bicycling during a steady snowfall. What it Feels Like in Winter Cycling Paradise See, it can be done with the right equipment. Notice that most of those bikes were equipped with studded tires for getting traction on ice.