Another caffeine-fueled day, and the Feed

Just not feeling the need to eat today, so I’m working the second half-gallon of coffee instead. I have to do something to maintain my “girlish” figure, right? I mean I have found where all the new pounds are going and there is literally nothing I can do about it short of starving myself periodically. The extra weight is coming in my chest and shoulders, unless Mrs. the Poet has found a way to make all my shirts tighter up top and looser in the middle. And I’m sure that lump on the back of my neck has something to do with the weight gain above and beyond the fact that I can’t ride a bike because it exists on my neck. The thing is huge now, and is seriously interfering with my daily life. And it has to weigh at least a pound all by itself.

Up first is an arrest in a drunken vehicular assault down in the RGV of TX. Three Cyclist Injured, Suspect Faces Charges I think whoever supplied the minor with alcohol needs to be charged in the crime also. And something needs to be done to keep drunks off the roads. I’m in favor of taking the cars away from drivers caught driving drunk, but I don’t know how that would keep people from driving drunk in the first place.

And over in Houston they are building something approximating Dutch-quality infrastructure. Take a Look at Houston’s First On-Street Protected Bike Lane and New Green Bike Lanes Downtown And they need to put another protected bi-directional lane on the other half of the couplet so that people can access destinations on the street going the other direction. But baby steps…

And some people are just scum. ‘GHOST BIKES’ VANISHING FROM HOUSTON STREETS

And from a link gleaned from the previous paragraph, Denton and Lewisville are going to get connected by bicycle infrastructure getting round the I35E blockage. Path offers ride alongside rails This fills a critical gap in getting around the north central part of the Metroplex. Until now cyclists wanting to get from Dallas County to Denton had to either take the A Train or go through Frisco and cross over on 380, neither of which is ideal.

Next state over is an update on a wreck from a few years back. Severly injured cyclist says his life was ruined by drunk driver in fatal 2012 Perkins Road crash This guy was messed up even worse than I was, and the other guy died. The driver had a BAC of 0.307% which means that if he wasn’t an alcoholic he would have been unconscious.

A little PR from CO. Crammer: You know me, I ride a bike Making cyclists “human” instead of “other” makes some drivers think twice about running one over. I hope so anyway.

The Chinese BSO Wal-Mart sells will get painted and partially assembled in the US before getting boxed and shipped to Wal-Marts. Made-in-America bikes hit Wal-Mart “Assembled in USA from components manufactured elsewhere” bikes come to Wal-Mart…

A cyclist in Canuckistan gets an unpleasant surprise after a right hook. Cyclist Rylan Kafara gets $6,000 bill after collision with SUV

Another protest I was invited to attend and cover over in Jolly Olde. London Cyclists Stage Protest in Memory of Greek Bike Rider

Some infrastructure news from Jolly Olde that does not bode well for the future. Taking Cyclists Off Roads Is No Way to Improve Transit As the article points out there are a number of proposals that spend buckets of money to just get cyclists off the roads but not let them get to where they need to go.

And I have run out of links again.

Hoping my words don’t stop again, and the Feed

Well yesterday’s post was an embarrassment. I just wasn’t sure if putting up the post was more embarrassing than not, but I put up a post every Sunday unless physically prevented from doing so. Nothing was physically preventing me yesterday, except the lingering effects of getting hit with a truck 13 years ago. So, you got a “post”. Also this morning I went on a quest for light, so that Mrs. the Poet would stop complaining about how dark it is in the bathroom, so I bought the dimmest possible LED lights that fit the fixture in the bathroom and filled every socket. The effects can be seen here.

Picture from another room with normal room lighting. 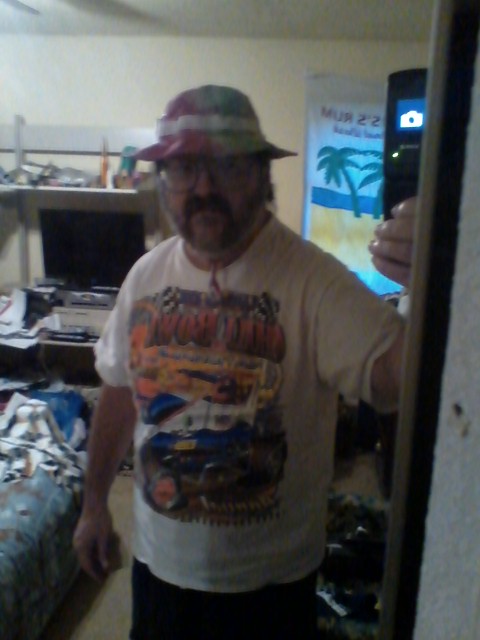 Picture from the bathroom with all the sockets filled. 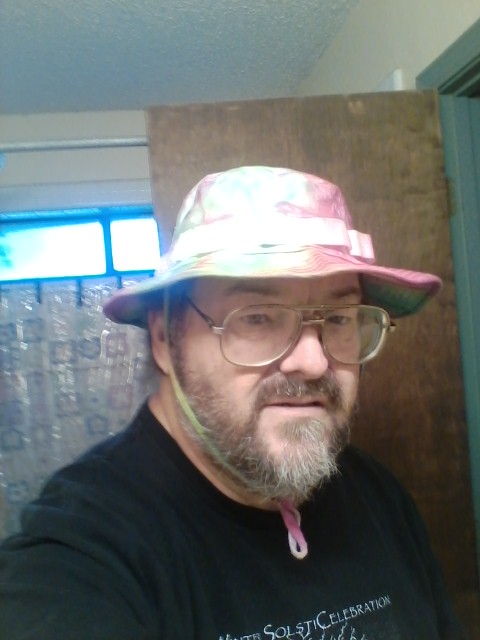 Notice how much light is reflected from the hat in the second picture. Both pictures are of the same hat. And same guy wearing the hat, but the less said about that, the better. The doctors did miracles putting my face back together, but they really didn’t have much to work with from before the wreck.

And I hit Publish instead of Preview to check to make sure both pictures came out, so some of you are looking at this and wondering where the Feed went. Sorry.

Another hit-and-run from the Show-me state this time. Woman Sentenced to 7 Years in Prison for Fatal Hit-and-Run The guy that was chasing her is still facing a murder charge…

The perp who ran into 4 cyclists riding on the opposite shoulder of a bridge approach is getting a great plea bargain, if she takes took it. N.H. woman accused of killing 2 cyclists must plead today The article is from Friday morning, and was posted in Saturday evening’s Feed. More N.H. woman in deadly bike crash to plead guilty

You know I can’t be quiet about this subject. Time to use your head and wear a helmet when cycling The head injury rate for drivers is higher than for cyclists, where are the articles about helmets for drivers? The article leads off with a story about a cyclist with great hair getting hit by a van and going into a coma. Note that he suffered life-threatening injuries to most of his body, and was only saved by the use of advanced medical techniques, but no mention was made of the lack of airbags and crumple zones on a bicycle, just the miraculous effects of wearing a magic styrofoam hat on a small part of your head.

Our Daily Ted. The Danger in Dog Day Afternoons

And finally a cop that knows the law. Ask a Phoenix cop: Who has right-of-way: bike or car? The answer is Yes, and It Depends.

I’m pretty sure my readers don’t buy bikes from big boxes, but you might tell your friends about this link. Major retailers put to safety test when building bicycles for kids I have worked on bikes that only had the pedals on finger tight, the CRANKS only on finger tight, brake cables, seat posts, and handlebars that were, you guessed it only finger tight. And tires that had about 5 pounds of pressure, that’s another common one…

And those were all the links I had today.

I just got back from doing a “house call” to get a church member’s bike road ready that she bought at a yard sale for $5. That bike was a horror story. No kidding, that bike could never have been ridden since it was first purchased, because it was never assembled right. The brakes were not hooked up correctly, the shifters were out of adjustment and the limit screws on the derailler were both set wrong, but the most frightening things were the headset and the crank bearings. The crank bearings were finger-tight, and the headset adjusting race was not even finger tight, the tabbed washer was jammed on the top of the fork, and the lock nut was sitting loose on the top of the tabbed washer. Basically the only thing holding the fork on was gravity and wishful thinking. So the person from church is going to pick me up again tomorrow so I can bring my tools and get this bike safe.

Something interesting that happened this week is a woman stopped me in the grocery store while I was picking out yogurt and told me I was “cute”. At my age I don’t think I qualify as “cute”, but I am in pretty good shape for any age. I mean you can’t see my ribs, but if my abs had that kind of structure you could see my six-pack. I have the classic broad shoulders and narrow hips of the American Movie Hero. I’m good-looking enough I guess, but “cute”? I guess “cute” is in the eye of the be(er)holder. I don’t know if this woman had had any beers or any other intoxicating beverage, but it was late at night when it happened.

Now what happened this morning was more classic in the form of a passenger in a car yelling something unintelligible out the window as he drove past only to have to stop at the next red light right next to the last spot in the through lane where I was going. When I got to the end of the line of traffic in my lane I looked over and the male teen-age passenger looked like he was trying to crawl through the seat he was slouching so low while the driver was looking sheepish in his seat. I was wearing my ANSI Safety Lime wicking polo that an ex-girlfriend found for me, so I looked vaguely official with my collared shirt. I love when that happens.

I’m trying to re-hydrate before I have to get back on the bike to ride to church for the evening service, I was a bit parched by the lack of humidity on the way back and by all the sweat I left on the garage floor trying to get the bike put back together.

I’m watching the end of the TdF stage 14, and just heard they found 28 tacks in various tires on the stage at the top of a climb, with Cadel Evans having at least 3 in his tires (because he had to stop 3 times to change wheels). As the program is going off I hear a possibility of a criminal investigation to find the culprit responsible for the attack on the Tour. They take this very seriously in France. At the very end of the program they updated the count to over 30 tacks, including some that they were showing on one of the police bikes that “protect” the Tour

After the Tour is over I’m going to fix a noodle bowl and watch the results of the various car races of the weekend. Then I have to hit the road again.