More stuff came in after Mrs. the Poet went to memorialize her sister, and the Feed

Maybe I could get a job writing headlines for UK newspapers, whadyathink? Anywho, Mrs. the Poet is now safely ensconced at O’Hare waiting for her connection to La Guardia where her dad and step-uncle will be picking her up for her trip to the boonies of Upstate NY. I expect to hear back from her when she gets to he mom’s house.

But the part for the Mini Sprint-T came in this afternoon and I couldn’t resist slapping the temp adhesive to some of them and mocking them up. The first thing I did was assemble the 700R4 transmission and mount it to the back of the engine, the second thing I did was add the EFI throttle body to the manifold. Then as soon as I could move things around without dislodging them I took a picture in front of the bucket in about the same orientation as the last mockup picture. 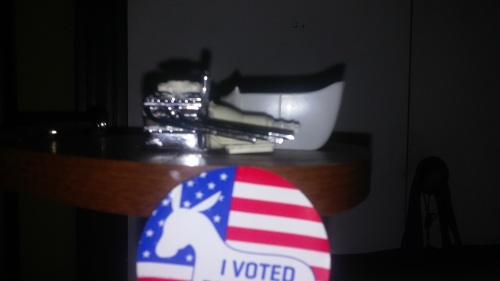 Can you see the problem? Look at the location of the transmission tailshaft assembly in relation to the body. Now can you see the problem? The end of the transmission is literally right next to the driver’s hip. Now in my case that’s not a problem because my ass is narrow and deep. I am literally 13″ wide in a 22″ space where the tailshaft is, so I have plenty of room to park my butt. Other people trying to drive my car are not going to be as comfortable. But wait! There’s more! 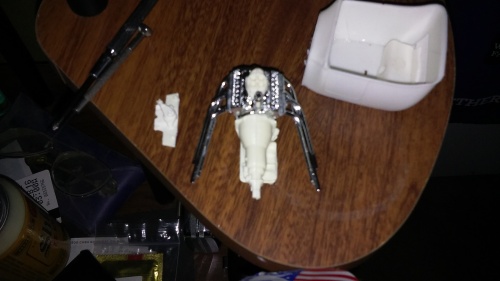 Can you see the other problem? 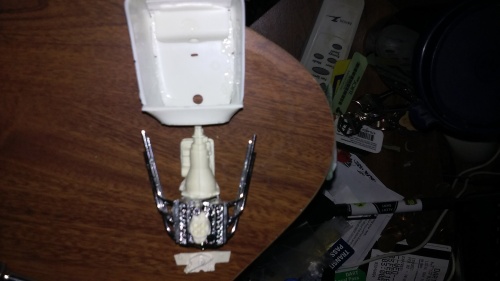 See how wide the transmission is all the way back? That’s going to impinge on lateral leg room almost all the way to the seat. I had previously measured the width of the footbox as 7.5″ to 8″ at the bottom with a little bit more room for the left foot as the tumblehome of the body went out as the side of the body went up. Taking the firewall out and sliding the transmission inside the body really shows how little room there is. 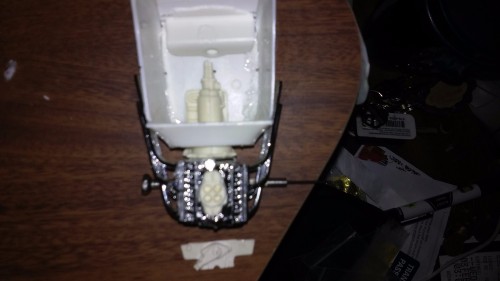 As you can clearly see the 700R4 was not designed for a severely dropped T-Bucket. I’m obviously going to have to provide a foot rest for the passenger and do a lot of contouring for the transmission tunnel to get everything and body inside the car. Ain’t engineering with pre-existing components fun? 😛 That thing in front of the engine is a combination of the timing cover, water pump, front engine mount, and alternator and power steering mounts all molded as a single piece. The balancer/crank pulley fits in the half-moon notch at the bottom that matches a hole in the front of the block, the water pump pulley goes on the water pump, and the alternator goes on the passenger side and the power steering pump goes on the driver side both at crank level.

Up first, a kid can’t even play in front of his own home without risking sudden death. 4-year-old boy hit, killed in parking lot in southwest Houston Seriously, are you in that big of a hurry that you run over a kid? The only “good” thing to come from this is “Police said, at this time, they do anticipate the driver will face charges.”

Still in CA. Bicyclist Killed on Monday Identified as 16-Year-Old Hesperia Teen hit-from-behind by a driver not paying attention, I bet a dozen doughnuts that LEO figures out some way of blaming the cyclist hit from behind instead of the driver that hit him and left the body spread over the hood of the SUV.

Legal infrastructure in CA. How does the three-foot rule apply when there are already bike lanes in place? Move over to pass at least 3 feet away from cyclists. Whodathunkit?

More infrastructure in CA. CELEBRATING PAGE STREET I would be interested in finding out how this works out as far as safety and usability.

More infrastructure from America’s Copenhagen. City reboots plan for SE Ankeny traffic diverter, preps for others This was supposed to be a greenway mainly dedicated to bicycles with cars “allowed”, but they are taking it over.

More infrastructure, of the IT kind. City of Portland’s 823-SAFE hotline now offered online So now you Portlanders have choices on reporting dangerous conditions.

Another link to that cyclist with an ICE-assist bike getting hit from behind in FL. Police ID bicyclist hit, killed on Westside And another media outlet feels the deceased’s criminal record has something to do with the wreck.

CO hit-and-run wreck where the bike was resting neatly against the rider’s backpack on the side of the road. Pedestrian Hospitalized In Mysterious Hit & Run In Fort Collins Can you say “tampering with the evidence”?

Over on Jolly Olde people are losing their minds over a guy bringing a bike on a nearly-empty train. Another ‘selfish cyclist’ on a train row as passenger takes up SIX seats with bike

Screw up installing bike racks so that they can only hold a quarter of the bikes intended? It’s an art. ‘Useless’ bike racks by Tube station were intended as public art, north London council insists No, seriously, it’s art.

Bike mode share in Tokyo is a cultural thing instead of an infrastructure thing. Why Tokyo Is Home to So Many Cyclists But So Few Bike Lanes