Still here, still nothing much to report, except a shocking picture of a sick cat (CW)

Basically the most newsworthy thing this entire week was my son is taking a long weekend in San Antonio so no grocery run Saturday, and my feet hurt too much to take the bus to the store and backpack the groceries home. Yay, news!

On other fronts one of the people I follow on Twitter turned out to be a scam artist from Ghana, asking me for money after a long conversation by DM. Fortunately my BS detector started going off well before the request for money for her mother and babies. And no it isn’t because I want her mother and babies to starve, it’s because I don’t believe those are her mother and babies in the pictures she sent and put in her account. I might be cynical (YA THINK?!?) but I’m also experienced in getting scammed, having been scammed many times in the 61 years I’ve been crawling around this planet. Actually most of the time when people try to scam me I didn’t have any money to get scammed out of.

On the Sprint-T front, currently the best option is the junkyard 5.3L iron block LS engine and a 4l80e transmission which will give me a 1800 lb. car with 300 HP at the wheels if I just leave everything stock, or 400 HP with a cam swap and headers. Since I have to build headers to get the exhaust out of the firewall anyway, spending the extra $200 for the extra 100 HP seems like a decent trade off, since I’ll have to tune the computer setup either way.

Now what would be cool is if the engine comes with the VVT cam drive which would let me tune the cam timing for best low end and high end power, if I also get the ECU and harness that originally came with the engine, which kinda supposes I get the engine from the vehicle it came in. But I have been reading articles about tuning the VVT and compared to fixed cam timing it can be worth as much as 50 lb-ft of torque below 3000 RPM compared to running a fixed timing setup for high RPM power. This means I can get more dig out of tight corners when racing and still have power at high RPM. It also means I can squeeze the last MPG out of the engine for the transit from one race to another, as getting more power at low speed means I don’t need to burn as much fuel to get the same speed as power required doesn’t change.

Other things dancing around my brain included seeing cars at the Chili Bowl Midget Nationals that had either the right or left halves of Chevy or Mopar V8s in front of the driver and thinking “Throw an LS3 engine and a clutch in that and you would have a killer A-Mod autocross car.” Sure I would need to run a larger radiator to cool 376 cubic inches of gas powered V8 than 166 cubic inches of alcohol powered 4 cylinder, but it would be a practical race car with a high power to weight ratio. The cars running half V8 engines were rules-limited to iron block and heads, so there wouldn’t even be that much increase in weight to go to the all-aluminum LS engine, and the radiator could go to the rear of the car right behind the driver to keep the balance the same front to rear balance and a 3 gallon fuel cell would be enough to run all day if I stayed with pump gas, so no heavy fuel tank hanging off the back. I could even take a wrecked sprint car and chop most of the front end off, keep the cage and rear suspension, and rebuild the front to the 72″ minimum wheelbase for A-Mod and get pretty much the same thing as there is very little difference between the two types of racer behind the firewall. There are wrecked sprint cars locally but they tend to be scrapped out pretty quick, so I would have to have $$ in reserve to buy the wreck practically at the track. Mind is still trying to solve the problem of not having a race car even though I have no way of getting the race car to the races. I don’t know why, besides I want a race car that I can race.

In other news I finally got Clyde to sit still for a minute so I could take a picture of how he looks now. Image not suggested for sensitive viewers. 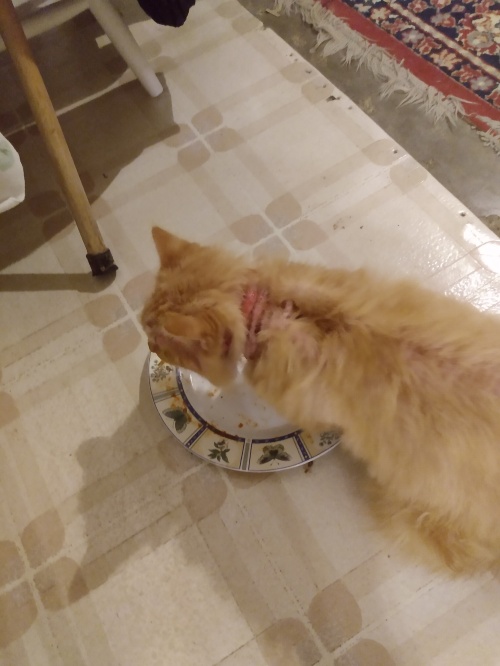 Yes that is blood oozing from those cracks in his skin, and that’s also the reason why we can’t use the medicine we have to make the itching stop. It has a big black box warning in the instructions to not apply to open injuries or sores, and will make him very sick if we do. So we have medicine to stop his itching we can’t use because he scratches until it’s raw and bleeding, and he still has itches he scratches until they are raw and bleeding 😿. Poor kitty! We might have to take him to the vet again.